Charity Fraud Warning From the IRS 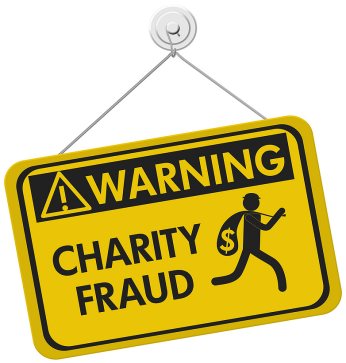 The IRS continues to see a group of ruses by dishonest people who trick others into doing something illegal or which ultimately causes them harm. Predators encourage otherwise honest people to do things they don't realize are illegal or prey on their goodwill to take something from them.

Here are two of this year's "Dirty Dozen" scams.

Fake Charities
The IRS advises taxpayers to be on the lookout for scammers who set up fake organizations to take advantage of the public's generosity. They especially take advantage of tragedies and disasters, such as the COVID-19 pandemic.

Scams requesting donations for disaster relief efforts are especially common on the phone. Taxpayers should always check out a charity before they donate, and they should not feel pressured to give immediately.
Taxpayers who give money or goods to a charity may be able to claim a deduction on their federal tax return by reducing the amount of their taxable income. But taxpayers should remember that to receive a deduction, taxpayers must donate to a qualified charity. To check the status of a charity, use the IRS Tax Exempt Organization Search tool. (It's also important for taxpayers to remember that they can't deduct gifts to individuals or to political organizations and candidates.)

Here are some tips to remember about fake charity scams:

• Individuals should never let any caller pressure them. A legitimate charity will be happy to get a donation at any time, so there's no rush. Donors are encouraged to take time to do the research.

• Potential donors should ask the fundraiser for the charity's exact name, web address and mailing address, so it can be confirmed later. Some dishonest telemarketers use names that sound like large well-known charities to confuse people.

• Be careful how a donation is paid. Donors should not work with charities that ask them to pay by giving numbers from a gift card or by wiring money. That's how scammers ask people to pay. It's safest to pay by credit card or check — and only after having done some research on the charity.

Immigrant and Senior Fraud
IRS impersonators and other scammers are known to target groups with limited English proficiency as well as senior citizens. These scams are often threatening in nature.

While it has diminished some recently, the IRS impersonation scam remains a common scam. This is where a taxpayer receives a telephone call threatening jail time, deportation or revocation of a driver's license from someone claiming to be with the IRS. Taxpayers who are recent immigrants often are the most vulnerable and should ignore these threats and not engage the scammers.

The IRS reminds taxpayers that the first contact with the IRS will usually be through mail, not over the phone. Legitimate IRS employees will not threaten to revoke licenses or have a person deported. These are scare tactics.

As phone scams pose a major threat to people with limited access to information, including individuals not entirely comfortable with the English language, the IRS has added new features to help those who are more comfortable in a language other than English. The Schedule LEP PDF allows a taxpayer to select in which language they wish to communicate. Once they complete and submit the schedule, they will receive future communications in that selected language preference.

Additionally, the IRS is providing tax information, forms and publications in many languages other than English. IRS Publication 17, Your Federal Income Tax, is now available in Spanish, Chinese (simplified and traditional), Vietnamese, Korean and Russian.

Yarborough CPA is eager to answer your queries about our tax services. You can begin your relationship with us today by contacting us using the form below.